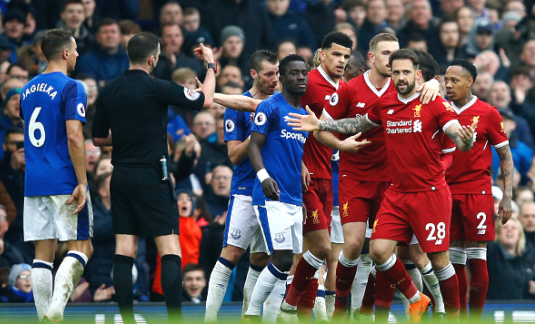 Look– nobody was expecting a show of brilliant football for this Merseyside Derby. In fact, was anyone really taking it that seriously at all? By the look on his face when Sam Allardyce subbed him off in the 60th minute, Wayne Rooney might’ve been the only one.

First of all, it’s Everton. This season they haven’t exactly been in the best form. But reeling from their loss 3-1 to Man City, some thought they might try to take advantage of a Liverpool stretched very thin. Yes, despite being in the best form of the season, fans and pundits alike were anticipating a lineup of children and invalids for LFC–many heralding the Reds as a team in crisis. To rest or not to rest? That was the question. The consensus was that Klopp would play it safe and keep our usual starters on the bench for Tuesday’s Champions League game.

And that’s pretty much what he did, let’s be honest.

But we didn’t see any of the U23s who sat on the bench actually make it onto the pitch. Curtis Jones, Conor Masterson, and the late-lineup addition of Rafael Camacho in place of a (are we really surprised) freshly injured Moreno (who was poised to replace Andy Robertson who–omg hold me–has a calf injury), never had a chance. They will remain strangers to us for now.

Instead, we were graced with a Ragnar Klavan at left back, not seen since a late-game substitution back in January versus Man City. Klopp kept our central defense strong and didn’t rest Van Dijk or Lovren. Leading the charge in quite an anticlimactic showing, Solanke and Ings left a bit to be desired. Solanke had a few chances that either missed the mark or went straight for Jordan Pickford’s face. Needless to say, our lack of depth at the front was painfully evident.

JK started Milner and Mane but subbed them off later in the second half with Ox and Firmino respectively, giving the game some of our usual swag but not enough to really count for much. The midfield of Milner, Wijnaldum, and Henderson had a great showing but the odd team dynamic up front–coupled with the slip-n-slide pitch and weather conditions–made it difficult to make much of our chances. The second half saw our midfield give up possession needlessly when Everton seemed to wake up in the last twenty minutes.

But Everton’s abysmal tactics for the first seventy minutes had most fans in general agreement that it was a snoozefest. Granted, it wasn’t the most exciting game of football, but there were some key moments to take away as a Liverpool supporter. Maybe just two. I’ll get to them. But first: Clyne was back for his first start of the season and didn’t disappoint. I guess seeing him out there just made it more upsetting he’d been out for as long as he was. But then we wouldn’t have Trent, now would we?

Apparently it’s been a 916 day wait for Danny Ings to start, and honestly, what a horrible time for him to be given the chance. Unfortunately, things just didn’t seem to line up for him on the wing. I’d say it wasn’t the best moment for him to prove himself given the patchwork of players on the field and the conditions, but if not now, then when? This was when we needed our players in the shadows to step up–and he didn’t quite rise to the occasion.

(He did, however, add one of, if not the only, spicy Derby moments. In a cardless and quiet game where one fan commented that Goodison Park was “more silent than a library”, Ings mouthed off to Seamus Coleman and called him a diver. While it was no Firmino-Holgate come at me bro, we waited with baited breath for something–ANYTHING–to happen as players pushed forward pulling the two apart. Henderson and Michael Oliver managed to diffuse it, and Coleman and Ings shook hands leaving us all to go back to counting how many times the commentators mentioned how “big” Virgil Van Dijk is.

“He’s gotten bigger since last I saw him, I swear,” one said, and I’m pretty sure my eyes rolled farther back in my head than they had in ages.) Something else weighing heavily on my mind is this: who was schooling who on how to properly tie one’s shoes here? My money’s on Milner, but who knows, really? On a serious note, Karius had a fantastic save that left most fans cheering and finally admitting we had a competent keeper and a top-level instagram model on the squad. I’d wondered if Klopp might play Mignolet just for the hell of it, but upon seeing the replay, I’m eternally grateful he didn’t.

So while I know we all want our traditional team rivalry to meet our expectations of a great and entertaining game (as it has, historically), there’s no denying that pretty much everyone has their eyes focused on Tuesday. This was never going to be anything other than what we witnessed–a good and safe effort. Sure we had some chances, we defended decently, but you have to wonder…what would the scoreline have been if we’d had our best, rested, and ready to go?

Forgive my sarcastic take on this frankly forgettable game. I’m probably using humor as a defense against my genuine nerves. It’s working about as well as the Klavan/Matip pairing did against Manchester City back in September after the thirty-seventh-minute red card. With the season we’ve had, the ups and the downs, it’s a wonder we’re quite possibly one goal away from the semi-finals of the Champions League. All I could think during this entire game was Oh god oh god please no one else get injured, for the love of–

And that’s the biggest take away from this game. No one got injured. Some of our starters got needed rest or took it relatively easy for this game.